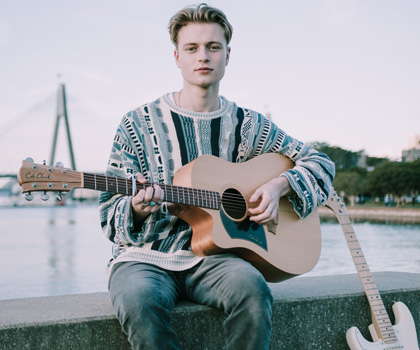 Growing up in the Blue Mountains mastering his craft, Manning Patston has been perfecting his skills as a singer/songwriter for many years in and around Sydney pubs, bars, markets, pavements and bedrooms. Now based in Sydney, Manning has built a local fanbase through his consistent performances all over NSW, including supporting Tyne-James Organ at a show in Camden in early 2019. Manning Patston released his debut single, Come Around in 2018 and was met with a sold out launch party at the now closed Record Crate only weeks later. This pushed his audience numbers to a new level and word got around that Manning is one to watch. He promptly followed up his debut single with ‘Better Off In Dreams’ later that year. 2019 was another big year with the release of his first EP, Sleepless. Manning Patstons astute chamber-pop chord changes and surreal lyrical asides, powerful singing and agile band creates the perfect Friday night vibe to a relaxing Sunday afternoon, fit for any occasion.